The reality cooking contest Masterchef Australia is a big draw in India. With its Season 10 currently airing on Star World during the weekdays from 9:00 pm to 10:00 pm, like many other Indian families, we too are glued to the TV. No other cooking competition can boast this show’s popularity esp. with the  Indian households. And watching the show everyday for 5 days a week, season after season, the judges, winners and contestants have become household celebrities. And needless to say anyone with an Indian connection is watched and cheered with an extra dose of affection.

And it’s in Season 6, in 2014 that we saw the contestant Sarah Todd on Masterchef Australia. She had an Indian connection; married to an Indian (separated now), she even made the Indian staple of paneer from scratch with charred onions during one of the cook-offs and it was a winner !!

She didn’t win the Season, but she became an overnight celebrity in India and a very familiar face in the culinary scene in India. She opened a restaurant called Antares at Vagator in Goa and we were curious to see the place. 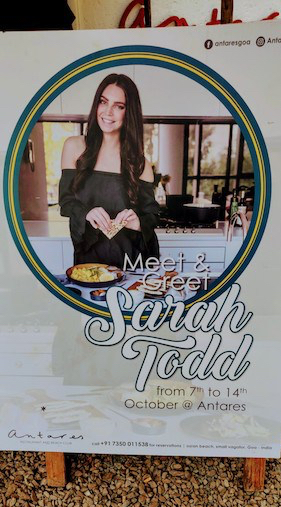 The place is a resort with a beach frontage at Vagator and it is still work-in-progress. The restaurant is open air with a thatched roof and it gets really hot in the afternoons; evenings would be more pleasant. There was a photo shoot in progress that afternoon as they were going to unveil a new menu in the second week of October.

We met Sarah Todd at the restaurant. All the early diners wanted a selfie with her and she obliged patiently and left soon. And the customers started pouring in soon after.

We ordered a mocktail called Appletini made of apple juice & fresh lime and a cocktail called Mango coconut margarita, served with a cardamom chocolate shard.

Not to forget the Fish & Chips. For the mains we tried the Fish grilled in banana leaf with rice and sambal and Barbeque chicken with corn puree and pomegranate salsa.

Everything was super good !! 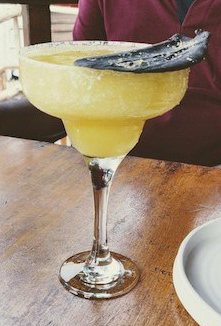 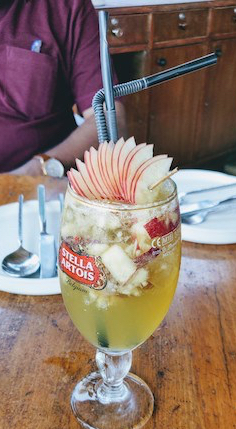 After the meal we walked down to the beach. The rooms were located below with views of the beach.

There was construction work in progress as seen from the picture below. The food was good and the restaurant seemed very popular; we being fans of Masterchef Australia, were very happy to have met Sarah Todd !!