And where else for this understanding, but the spectacular Museum of History, located right next to the Science Museum encompassing two magnificent floors of mostly life-like display detailing the evolution of Hong Kong and a special exhibition titled An Age of Luxury – the Assyrians to Alexander, on till 3 Sep 2018. The entrance to the museum is free and the special exhibition has a fee of HK$ 10 per person.

The museum is a visual treat, as it traces the story of Hong Kong from the geological formations to the reunification with China in 1997. It’s not just the exhibits, there are audio-visual presentations to explain and tie everything together.

We had about three hours to cover the museum before it closed by 7 pm. And there is a lot to see and we were rushing. A few interesting highlights are detailed below which left us a bit more knowledgeable than prior to this whirlwind time-travel across Hong Kong.

The first floor has galleries namely “The Natural Environment”, “Prehistoric Hong Kong”, “The Dynasties: From the Han to the Qing”and “Folk Culture in Hong Kong”.

Fishing, one of the oldest industries in Hong Kong and the exhibit below talks about the time before the invention of refrigeration.

Salted Fish out for drying 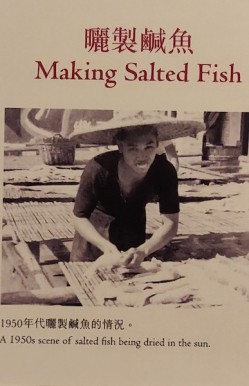 As per the Chinese wedding traditions, the bride was carried on a chair (bridal sedan) which was heavily curtained to shield her from inauspicious sights. This resembled the palanquin bearers we had back in the old days in India.

And the similarity does not end here; the Indian culture has the practice of arranged marriages and matching the horoscopes of the girl and boy before an alliance can be fixed. Apparently the Chinese also practiced arranged marriages and they too would first compare the birth and astrological particulars of the son and daughter and if only they were compatible, would a meeting of the prospective bride and groom be arranged.

The “lighting lantern” ceremony is held on the 12th day of the first Chinese lunar month. The paper lanterns were lighted and hung as an announcement to the gods of the initiation sons born into the village in the past year as new clan members.

In Hong Kong village communities, the Chinese Opera is staged to give thanks to the gods as well as to entertain the villagers during festivities.

The second floor has the galleries showcasing “The Opium Wars and the Cession of Hong Kong”, “Birth & Early Growth of the City”, “The Japanese Occupation” and “Modern Metropolis & The Return to China”.

Hong Kong became the centre of the contraband opium trade to China after being ceded to Britain in 1842. Hong Kong also served as an entrepôt, for the export of Chinese products such as tea, silk, porcelain, bamboo matting, sugar etc and import of wool, metals, cotton etc to parts of China.

A grocery store or “sze dor”, the early super markets.

The tramway is Hong Kong’s oldest mode of mass public transportation by land.

In the last 1940s, the turmoil in China caused by the Civil War, sent the industrialists fleeing to Hong Kong with their capital and machinery and re-establishing their factories here. Initially, the industrial products were assembled from imported parts. The industries that flourished were textiles and plastics.

An Age of Luxury : the Assyrians to Alexander

The exhibits themselves hold no charm only a sense of curiosity, if it weren’t for the accompanying detailed descriptions. The special exhibition was made even more appealing by the display of quotes by Herodotus, the Greek historian, also known as Father of History.
When we try to visualise luxury in the Iron Age in the Middle East and the coasts of Mediterranean, the most common elements that jump forth are gems, precious metals, ivory, rich fabrics, ornate furniture and utensils, palaces etc.
Here the symbols of luxury included Assyrian bronze, Babylonian stone, Greek glass, Phoenician Ivory and Achaemenid gold.
The exhibit had a garden to symbolise luxury. It’s a wall relief depicting the garden, on the upper half of the wall.

This garden was created by the Assyrian king Sennacherib in the capital city Nineveh (modern-day Mosul, Iraq). It boasted exotic trees, plants and animals. There are canals created to water the garden.

Glass was apparently a highly sought after luxury product. The Mesopotamian glass technology did not use the method of blown glass, but instead they were formed by dipping moulded air-dried clay into hot glass. The glass vessels made were small and held valuable cosmetics or perfumes.

Not to forget, gold is an essential part of luxury.
Here ends the very small view of the special exhibition. We we got out at 7 pm and the city had transformed to another shade…….more in the next post.