Dharamshala a quaint hill town in the Kangra district of Himachal Pradesh framed by the Dhauladhar ranges, nestled amidst the deodar slopes, serving as a cantonment area; all of a sudden, was thrust into the limelight with the arrival of His Holiness the 14th Dalai Lama.

Though Dharamshala has been the home for His Holiness for the last 60 years; it was in Mussoorie, another hill station in the Dehradun district located in the state of Uttarakhand, that he first established the Central Tibetan Administration (CTA) in 29 Apr, 1959 and later shifted it to Dharamshala in May 1960, an interesting titbit gathered from the exhibition titled ” From Home to Exile – Remembering 17 March, 1959 ” – being showcased at the Tibetan Museum in the Tsug-la Khang premises – home of His Holiness. 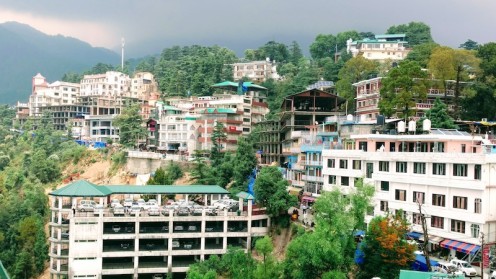 View of the distant ranges from the Tsug-la Khang Complex

It’s the perfect first stop to assimilate the history of Tibet  and offers a graphical crash course to understand its conflict with China and brings you up to speed. 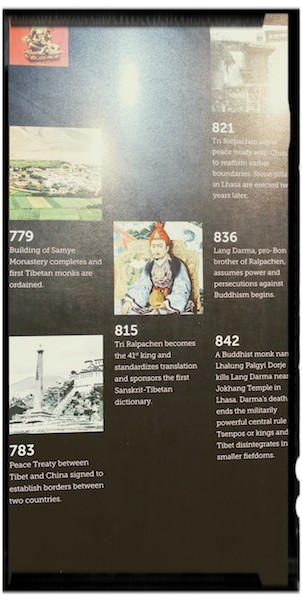 Few interesting dates from the timeline –

763 AD : The Tibetan empire was powerful and ruled a large part of Central Asia. Trisong   Detsen, the 37th Emperor of Tibet sends 200,000 soldiers to occupy the Chinese capital of Xian.

779 AD : Building of the Samye monastery and the first Tibetan monks are ordained

836 AD : Lang Darma, pro-Bon assumes power and persecutes the Buddhists. The Bon religion of Tibet existed before the introduction of Buddhism.

1240s : Mongol invasion of Tibet and subsequent establishment of religious and political relations with the Mongols.

1642 : Gushri Khan overthrows King of Tsang and confers upon the 5th Dalai Lama the supreme authority over all of Tibet. The Ganden Phodrang rule over Tibet begins. It’s conduct was based on the Tibetan code of law established during king Songtsen Gampo’s rule, the 33rd Emperor of Tibet ( 620 – 650 AD)

From the exhibition at the Tibetan Museum

From the exhibition at the Tibetan Museum

1904 : British military expedition under Francis Younghusband forces its way into Lhasa to contain the threat from Russia.

1959 : His Holiness the 14th Dalai Lama decided to flee into exile

This Tibetan Temple houses the image of the Lord Buddha, made of brass with gold plating.

Also seen are the images of Guru Padmasambhava, made of brass with gold plating and Avalokiteshvara with a thousand hands and eyes, made of silver – Bodhistattva of Compassion, Patron Deity of Tibet . Both these images were behind steel security doors. 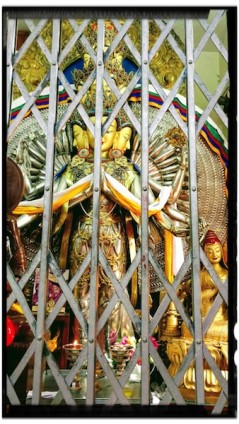 Statue of Avalokiteshvara – Deity of Compassion

Kalachakra is one of the many tantric teachings in Tibetan Buddhism.

Mandala painted on the wall of the temple

It’s an unassuming building, functional; but not what we expected. We were expecting grandeur considering the rich cultural heritage of Tibet and it is the home of His Holiness. But it is a home in exile and visited by people all over the world, for various reasons. Hence sets an example in being welcoming to all, unpretentious, austere and yet influential, resilient and hopeful.

“Om Mani Padme Hum“- a Sanskrit mantra, sacred among Buddhists loosely translates to “Behold ! The jewel in the lotus” – an invocation to Avalokiteshwara, the Buddha of Compassion, Patron Deity of Tibet, is written on paper and inserted into the Mani Prayer Wheels. When an individual spins the wheel, it is said that the effect is the same as reciting the mantra as many times as it is rotated within the wheel. They are to be rotated clockwise.

Its now half a day spent here…..moving on….