At the end of the city tour, looking at the photographs of the afternoon, my husband’s first remarks were “ You have quite a lot of photos of buildings….”

Yes……there are high-rises everywhere in Hong Kong and for good reason, housing is their most rampant problem. Most of the high rises have shops on the first two floors and residential spaces above. All this and more were the info provided by our guide during the city tour in the afternoon. He said the people of Hong Kong are not looking forward to the integration with mainland China. Currently Hong Kong has free and compulsory education till 18 years of age, free medical and none of this is available in mainland China and all this may change. The government also provides free housing, but the wait is 10 years.

Hong Kong has four main districts – Hong Kong Island, Lantau Island, the Kowloon Peninsula and the New Territories.  Between Hong Kong Island and the Kowloon Peninsula lies the Victoria Harbour. The total area of Hong Kong is about 1000 sqkm and only a small percentage of this is inhabitable. The average apartment size of a two bedroom flat is 400 sqft, he went on to say that the Indians have bathrooms of that size back home. Only 15% of the Hong Kong population of 8 million are religious as per our guide, the rest of the people believe only in themselves.

Hong Kong is an engineering marvel, you gape at the structures they have built and wonder how they did it and how they maintain it. We went through the tunnel under the Victoria Harbour. There is another underwater tunnel being built. It starts with a bridge into the sea and then the undersea tunnel, to connect Hong Kong with Macau by road. It will be opened this year and currently the way to Macau is by ferry.

Our guide associates Indians and the diamond trade. You do meet a few Indians here, not rampant as in Singapore. We saw a Gujarati family at the hotel, filling boxes with vegetarian food from the hotel.

We kept seeing cars having license plates with black lettering on yellow, taxis we assumed and black lettering on white, private vehicles, we assumed; as is the norm in India. But we were surprised to know that all the vehicles have black on yellow combination for the license plate on the rear side of the car and black on white combination for the license plate on the front side. Surprisingly Tesla is the fourth most popular car on Hong Kong roads because of their electric cars and petrol costs are double the price in India. The most popular auto brand being Toyota, all the taxis are Toyota.

Our city tour lasted half a day; began with a jewellery factory, though we couldn’t fathom out any valid the reason to include it in the itinerary, only consolation was that en route, we got a glimpse of the old buildings in Hong Kong, low rises with window air-conditioners. If anyone else has this stop in their itinerary, please consider leaving it out. It’s only a jewellery showroom and though the wares are bright and shiny, most people who visit just take a quick tour and hop back into the cab. It’s only to signify the importance of trading and the service industry to the economy of Hong Kong, which has nil natural resources. 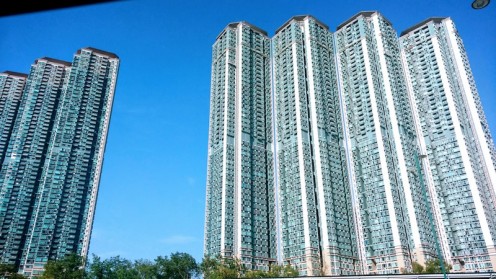 The second stop was the Aberdeen fishing village, the term fishing village is a total misnomer for this place. It’s not a village but a picturesque harbour. The Aberdeen harbour was the first place where the British set foot on arriving in Hong Kong. Aberdeen was the centre of the incense trade and the name Hong Kong translates to “ Fragrant Harbour”. Here the guide suggested a sampan ride, but we were content to just take in the views.

The next visit was the Victoria Peak for the legendary view of the Hong Kong skyline. There is a tram ride to the peak and down, but the queue was too long and we rode up to the peak in the cab. The view was spectacular and the ride to the peak was enjoyable, combined with the chatter of info from the guide.

The last stop was to get a glimpse of the Forever Blooming Golden Bauhinia Sculpture at the Expo Promenade. It is a golden statue of the Hong Kong national flower, also seen on the national flag. It is the emblem of Hong Kong similar to the Merlion for Singapore; constructed in 1997 as Reunification Monument symbolising the handover of Hong Kong to China. Nearby is the famous Hong Kong Convention and Exhibition Centre (HKCEC).

It was now late in the evening and we experienced Hong Kong rush hour traffic also as we head back to the hotel. Last day in Hong Kong and we were flying out tomorrow to Bangalore via Malindo Airlines with a stop over at Kuala Lumpur.