Full house at Creatures of the Night show

Kings of the Skies show

Inside the Buddha Tooth Relic Temple 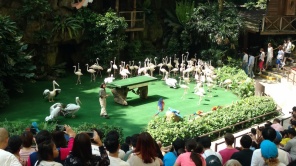 Jurong Bird Park is a bird zoo, but thanks to the branding and entertainment shows, this aviary is anything but your ordinary bird zoo. Back home the birds occupy a small and neglected section of the zoo, while the animals are always the stars. But even then, the animals are mere exhibits. Here the birds shine and there is nothing else to dull their sparkle. This bird park offers a combination of exhibits and shows to provide the key element of entertainment, resulting in a memorable experience.

The birds are grouped into various exhibits such as – the Penguin Coast, home to penguins such as  the Humboldt, the Rockhopper and others. They live in an indoor climate controlled den. Then there are the Dinosaur Descendants, the flightless birds like the ostrich, emu, cassowary. There are other such exhibits and birds of a feather flock together. The park has the rare Blue Macaws – inspiration behind the Rio movie series.

It was a rather hot and sunny day and we were not very eager to walk the entire park. No problems…..there is the tram ride with commentary and you can take a full round of the park and if there is any exhibit you want to take a closer look, hop off and catch the next tram. They think of everything !!

We were shown that an owl flies silently swooping down to catch its prey. We didn’t know that owls flew silent, there was absolutely no flapping sound. They had to, they were predators in the night and had to work noiselessly.

The presenters also gave interesting facts about the birds…….

How do the flamingos get the pink colour, they are born with grey feathers?

How many degrees can the owl turn it’s head?

In the evening at about 6 pm, we were off for the Night Safari at the Singapore zoo. We assembled at the Buddha Tooth Relic Temple in Chinatown, another historic place and had sometime to visit the temple before boarding the coach to the zoo. Our guide was an interesting and enterprising Chinese and he made sure the diverse group of nationalities in the coach respected each other’s time and not wander off nor make others wait when it was time for the ride back. He gave us a heads up on things to do, see at the zoo. After the Night Safari we could either go on a walking trail to explore the zoo or catch the famous Creatures of the Night show.

The Night Safari is a 40 min open sided tram ride to explore the night-time wilderness. It was a first to explore the zoo in the night. The tram again had commentary and  provided interesting facts about the animals. The safari was good. The strategic lighting at the enclosures ensured that we got a good glimpse of the animals; the night was also a good camouflage to hide the deep pool chasm or other barricades that ensured safety, while giving the impression that the animals were a mere stone’s throw away. We saw a whole host of animals  – the Asian elephant, sloth bear, giraffe, lion, tiger, hyena, deer and many others.

We had dinner at one of the many eateries here and tried the Hainanese chicken rice, really good !! Post dinner we queued up for the Creatures of the Night show, a very popular show and the seats get filled up fast. It was thoroughly entertaining and while the animals were cute, together with their tricks, they became adorable. We saw Otters sorting waste of plastic, paper and metal correctly. Racoons with their keen sense of smell could identify the fruit among tens of empty boxes. There were appearances by many other animals, sometimes among the audience.

Today was till date the best zoo experiences we had and to answer the questions above – flamingos are born with grey feathers, they become pink because of the algae and shrimp they eat. And the owl can turn it’s head 270 degrees, since they cannot move their eyes.