The Luge ride at Sentosa 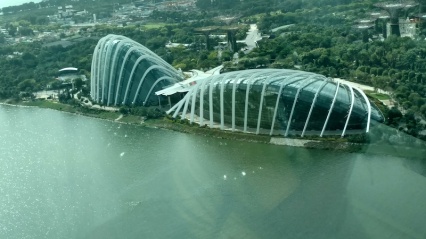 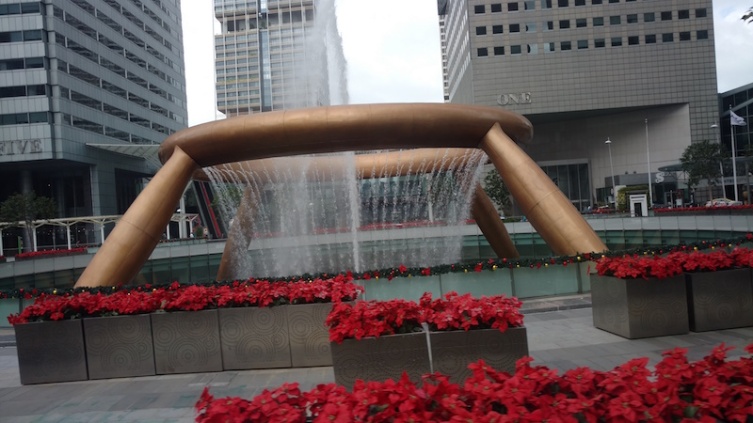 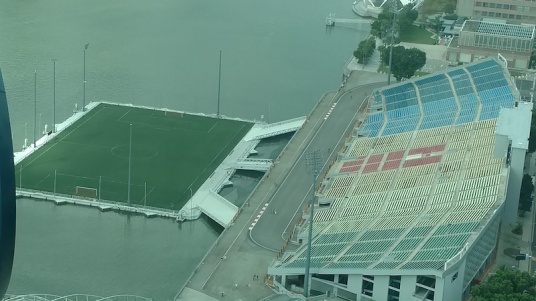 Madame Tussauds in the background 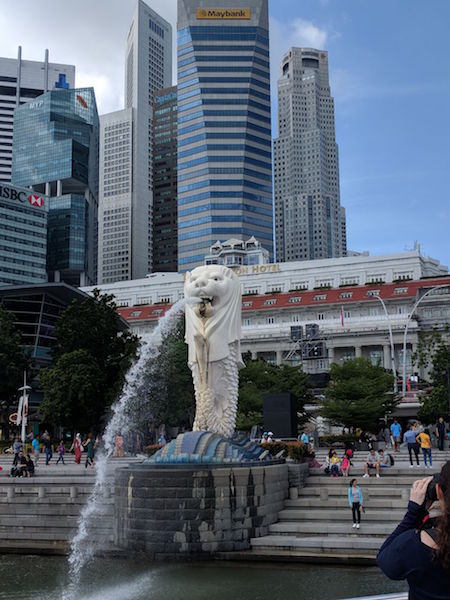 We were off on a guided city tour in the morning. The tour started with us circling the Fountain of Wealth at Suntec City. It’s a popular belief that going around the Fountain of Wealth thrice brings good luck. But our guide reminded that he has been doing guided tours for the past 18 years and not to mention the number of times he has circled the fountain…… he still hopes that one day, he will get lucky.

The Fountain of Wealth at Suntec City is marked by a bronze ring supported by four large slanted columns, with the water directed to flow inward to keep the luck within. The fountain is flanked by five towers representing the fingers and thumb, standing tall around the fountain. Our guide briefed us about the evolution of the country from Temasek to Singapura to Singapore. Chewing gums are banned in the country. The national fruit Durian is banned in the metro. Singapore consists of 64 islands…..he kept filling us in. The three major ethnic groups in Singapore include the the Chinese, the largest and making up almost three-fourth of the country’s population, followed by the Malays, the original settlers of Singapore and the Indians. He also spoke about the Japanese bombing of Singapore and the hardships faced by the people. He himself was a third generation Singaporean, is grandfather hailing from India.

First stop, the Singapore Flyer – Singapore’s giant Ferris wheel. It has 28 air conditioned capsules and the views are beautiful. While in the flyer, we got a full view of the The Float @ Marina Bay, the world’s largest floating stage. We also got a birds eye view of the The Marina Bay Street Circuit, the venue for the Singapore Grand Prix and the Flower Dome & Cloud Forest Dome, we visited on Day #2 at Gardens by the Bay.

Next was the Merlion Park. The Merlion is a mythical creature with a lion’s head and the body of a fish, used as the mascot of Singapore. The original Merlion structure has been subsequently joined by a Merlion cub, located near the original statue. We drove through the Central Business District (CBD), Chinatown and Little India. We saw the famous Raffles Hotel, named after the founder of Singapore, Sir Thomas Stamford Raffles, the British statesman. It was under renovation.  The last stop was a local chocolate and souvenir shop.

During lunch back at the hotel, we tried the local drink – Singapore Sling and the Laksa – a noodle and seafood dish in coconut gravy. Enjoyed both !!

Post lunch, we set off to Sentosa – the adventure island. We took the cable car to Sentosa from Mount Faber, the views around were spectacular as we crossed the Keppel Harbour. The ride took around 15 minutes. The cabins do sway in the wind and on the afternoon we were travelling, there was also a gentle drizzle…… for those with fear of heights, its scary. The more adventurous can try the cabins with the glass bottoms for 360 degree views.

There are plenty of things to do and see in Sentosa and can take upto 2 days. We had only half a day and started with the visit to Madame Tussauds followed by the Images of Singapore LIVE show – a live performance showcasing the evolution from the little Malayan fishing village to the swanky modern city. At Madan Tussauds, only Shah Rukh Khan was kept inside a glass box , probably because he gets the most clicks and the glass case was for his own protection.

We went for the 4D Adventure Land – a movie theatre with 4D cinema seats. The movie was Journey 2: The Mystery Island, not recommended unless you are a Dwayne Johnson fan. Then there was – The Luge – a variant of Go Karting; the track was downhill and we sped along a unique luge cart. It was very good and have to agree with the tagline “ Once is never enough !! “ This was followed by the Skyride – a four seater chairlift ride with a view of the Sentosa island.

Last was the show – “Wings of Time”, set on the beach, the show was running full house and our guide warned us to be on time. The show of lights, water and fire was mesmerizing. It was a grand end to the day. We took the coach back to the hotel. There were many other attractions in Sentosa like the Siloso beach, Kidzania – a city for kids, Butterfly Park and much more. We are covering Universal Studios and SEA Aquarium another day. But one attraction we wished to try was – I Fly – an indoor skydiving experience – next time for sure.